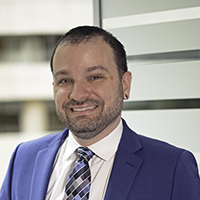 Experience: As the manager of legislative affairs, Michael is responsible for supporting ACHP’s advocacy efforts and helping shape ACHP’s legislative agenda. Prior to joining ACHP, Michael served as the Government Affairs and Communications Associate as well as the Government Affairs and Public Policy Coordinator at the National Association of Chain Drug Stores. Prior to that Michael served as State Advocacy Specialist with The American Foundation for Suicide Prevention.

Did You Know?
In his spare time, Michael is an actor and has been performing in various theatre productions around the DMV since 2015.