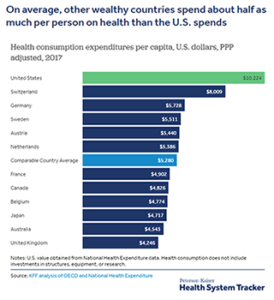 Every month, the Bureau of Labor Statistics issues its jobs report. For nine years, the nation has added jobs, fueled in part by strong growth in the health sector.

And every month, my friend Bob Kocher and I play a game on Twitter.

“Health care jobs are up again,” tweets Bob, a venture capitalist, physician and former adviser to the National Economic Council.

And I tweet back: “Is that good or bad?”

Bob’s response—which has grown increasingly forceful—is: “Not so good.”

In his analysis, and in the view of many economists, the health care jobs being created are adding cost in a system that is already too expensive.

It has been widely documented the U.S. spends  more per capita than any other industrialized nation on coverage and care—but our overall outcomes are mediocre at best. Who would have thought in 2019, our nation’s health care system would be looking at a decline in life expectancy, a rise in preventable diseases such as measles and a third of the population identified as pre-diabetic?

Academics have identified the central reasons for the spending binge. Prices – especially pharmaceutical and hospital – are high in this country. Our cultural DNA is to seek out the exciting, new treatment—even if evidence shows older, simpler and often cheaper intervention yields better results. Waste, duplication and unnecessary care account for up to 30 percent of the $3.4 trillion the U.S. spends today.

Government has made half-hearted attempts to steer purchasers toward high-value options. But in the current Washington climate of partisan divisions, it would be foolhardy to wait for policy makers to take the lead.

Our moral imperative to make health care affordable is also a business imperative. Today’s fragmented, fee-for-service model feeds off perverse financial incentives and prompts clinicians, payers and every other industry player to do more rather than to do what is right. It is up to us to align the incentives around what is best for families, communities and the nation.

I am pleased to report ACHP member companies have taken up the value challenge. As detailed in our report, Accelerating the Adoption of Evidence-Based Care: Payer Provider Partnerships, the ACHP member model of payer-provider relationships, value-based care and community health delivers greater value.

We will not achieve the goal of affordability by nibbling around the edges. At the same time, we know there is no single magical solution. We will not wake up one day and declare victory.

But we are making meaningful progress and I urge everyone in the industry to take on the challenge of making health care more affordable. Align the incentives, wipe out the waste, rely on the evidence and engage in the difficult conversations. Tap into the power of clinician and plan partnerships embodied in the ACHP model. By doing so, Americans will be given the health system they pay for and so richly deserve.